M-Audio is now a part of InMusic along with a few other iconic names in the mix. Since being picked up by InMusic, M Audio has re-released the Sputnik Condenser Microphone. When the Sputnik was first released 7 or so years ago the Sputnik was sold at a higher price compared to now. The current specs read similar to specs years before so I’m under the impression nothing has changed. The current promotional material for the Sputnik is less sensational compared to the past when the older M Audio Sputnik promo was toting a similarity with a Neumann U47 microphone. The M Audio Sputnik of today doesn’t dwell on similarities or clone status. 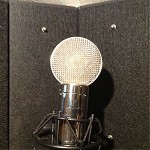 The Sputnik looks more expensive than the price which is currently $499.99. The microphone has a retro look and it’s made from solid brass coated with a nickel finish. In front of the mic is a switch for multi polar patterns. The capsule has two circular Mylar diaphragms with brass mesh surrounding it perfectly. The Sputnik also comes with a shock mount and a gigantic power supply which you will have to find a place for. M Audio was nice enough to include a 20ft mic cable with 7 pins only for the Sputnik. The cable won’t work for different mics. Everything is package inside a metal flight case which looks expensive.

This mic can work for all kinds of applications. It’s basically an all-around mic so you can throw anything at it like vocals, instruments etc. The Sputnik does have limitations. For one, it won’t work for all vocal types so you will have to be mindful of who is in front of it. The mic seems to like people with baritone vocals so if you have a higher register vocalist you might want to grab a different mic. One thing I’ve notice is that the Sputnik has a slight boost above 10k in Cardioid and Omni Directional mode. Vocalist who has sibilance in their voice should avoid this mic. It will bring out things you will not like. The Figure Eight mode works better for sibilance laden vocals but you will have to make sure you are in a treated room or vocal booth. The Sputnik is very sensitive and can pick up the slightest noise.

One of the positive things you get from the Sputnik is a creamy layer sitting in the higher frequencies. If you get a good take from a vocalist you will notice a nice sweet high in the vocals that is so unique to the Sputnik. I think those added harmonics has something to do with the vacuum tube the Sputnik comes with. 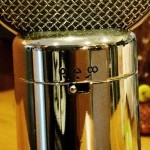 I’ve used the Sputnik with a few different preamps. The Sputnik is not friendly with different preamps. The documentation that came with the Sputnik stated you will need a good preamp for it and they are correct. Do not use cheap preamps with the Sputnik because it will not sound good at all. One cheap preamp it does sound good with is the Art MPA. I’ve used it also with a Universal Audio 610 which sounds ok with it. You will have to find a good combo for this mic because it is temperamental.

If you have sibilance in your voice or a vocalist with it, you will have to play around with the position of the mic. I find myself changing the position of this mic constantly. Once you find a good mic position you will use EQ less to get vocals to sound good and pleasant. This mic can be a chore with certain vocalist. If anyone is looking for an army Swiss knife mic, this is not it.

The M Audio Sputnik is a beautiful looking microphone that sounds amazing. It doesn’t work well for most vocalists but if you find the perfect voice for, it sounds amazing. This is a worthy mic to have in your mic locker.