Sometimes you have to perfect your craft and stay consistent with the work you do. Making a name for yourself in this music game is one thing, but making quality music will give your name weight. I had a chance to interview m.simp of Stompboxx Music to give us his insight. He is co founder of the sound design team MSXII that created Unkempt Breaks.

Tell us about yourself. Where you from? How long you been making beats?

​Hey thanks for reaching out, I appreciate the opportunity! I’m originally from west Texas, raised between Lubbock and Abilene. Up until a month ago, my family and I had been living in Austin, TX for the last 4 years, but have since relocated to San Antonio with my job. I say I’ve been making beats since about 15. Those that know me well can recall the days of my Playstation Music Generator grind. I was making music on that game pretty much every day of my life from age 15-20. Professionally, I’d say I’ve been making beats since 2010. This is the year we started Stompboxx. 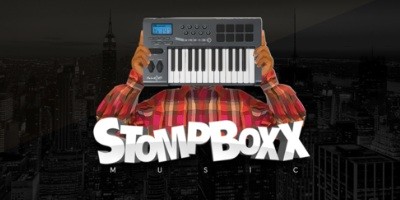 
​Yes, Stompboxx Music Group, LLC. is a production team composed of myself and a great friend of mine, Steven “Sharpsoundz” Sharp. We met around 2003 while playing in a local church together. On the side, we both were into studio production and obscure drums so the progression to create a team seemed inevitable. He and I produced for some of the same artists in the city we were in before finally officially becoming a production duo.

​That’s an easy one…the weapon of choice for me is Propellerheads Reason. I’ve tried alot of different things; Roland Fantom, MPC (1000, 2000, 2000xl), MV8000, Logic, ProTools, and the list goes on. Reason is just a program that makes sense for me. In many ways, it reminds me of that MTV Music Generator game on Playstation. I’m a very visual learner so I naturally gravitated towards it. However, I’m a self-proclaimed gear head so my studio set up will fluctuate with the seasons, moods, or projects I’m in the middle of. I now have a good mix of hardware and software. My latest additions have been an old Casio MT-31, an upgraded MPC 2000xl, and a MicroKorg. Tons of Rack Extensions and plugins as well.

Your music sound quality is really good. You have any formal training in sound engineering?

​Thank you. That means a ton. I’ve not had any formal training in engineering. Sharpsoundz studied at Berkley for a couple of years and I bummed a lot of what he was learning in the class off of him. He’d shoot me the assignments they had and I’d just do them at the house. Mainly, I learned by trial and error, using reference mixes, and burning cd after cd after cd. My wife can tell you about the thousands of nights she’d hear the garage going up at 3-4am while I strolled the neighborhood listening to mixes. I still do this to this day. Sometimes I may just burn a disc with only the kick drum changed and then another disc with the organ eq’d differently. Everything is about detail. Thus, my car is home to hundreds of loose cds with no label. I know what each disc contains by looking at the back of the disc. Crazy process, but I’m sure I’m not the only one that may do this!

What Daw do you use? You use any outboard gear? Comps, Eqs, fx etc.?
​
Again, Reason is my DAW of choice. However, it’s still tough even in version 7, for me to call it a complete DAW. I love Reason like no other, but it still lacks some features that have been staples in other programs for years. That’s a completely different discussion. All in all, this is why I love Reason though–it’s producer driven. Outside of the few pieces I’ve mentioned, I don’t have any outboard gear other than my Digi 002 rack. Everything runs in and out of this beast. I hope one day to get it to the good folk at Black Lion Audio for a modification!

What inspires you to make the music you make? Who are your influences?

​I’m inspired by a lot. It really just depends on where I’m at, what I’ve recently heard or seen, maybe a book I’ve read or anything. I always try to take a creative approach when in the lab. I start with a blank session, every time. Musically, my influences are producers like Timbaland, The Neptunes, Dilla, and Dre. I’d credit these guys for getting me to dive into sound and the detail of production. Mainly Timbaland. That dude is just insane.

I had the pleasure to interview producer Sair Bashir from Vineland, New Jersey. Sair is very versatile with his production skills and he’s becoming a favorite of

James Data is a dope producer that’s been in

Beatnick Dee is a producer that wears many hats.