I’ve decided to review the Black Lion Audio RME Fireface 800 Mod to give my readers the real deal. These types of modifications are what made Black Lion Audio a name on the forums. The one mod that gains them a ton of attention was the Digidesign 002 modification. Looking on their site back in the day I saw one review of the RME Fireface 800 mod and I was sold. The only thing perplexing was I saw no link advertising the Fireface 800 mod as something they do or still do. The review was the only evidence they could possibly do the mod so I decided to call them. I can’t remember who I spoke to on the phone but they were real cool. They told me they still do the mod for the Fireface 800 and explained what they would modify inside it.

Booking time with them for the modification was two months or more out. I was hoping they could do it sooner but I decided to be patient because I wanted to know what the hype was about. The guys at Black lion Audio talk me into the Micro Clock mk2 and actually cut the price in half. I wasn’t planning on buying anything else but they made it seem like it was a must have. So I patiently waited for my date to arrive and since I live in Chicago where Black Lion Audio is headquartered I wanted to bring my Fireface 800 in personally. Black Lion Audio has their operation in a loft with a long row of work benches along the wall. I saw rows of Digidesign 002s stacked up from the floor. I was totally impressed with the operation. It reminded me of pirates of silicone valley movie when Steve Jobs and Wozniak in the garage. They said it should be done in 7 business days but was actually 3 days. After the mod was done I went back to pick it up and met the old owner Matt Newport. He’s a cool guy. Presently Black Lion Audio has new owners but I don’t know who they are.

Once I got the modified RME Fireface 800 back to my studio I frantically set everything back up. I loaded up an old session and really didn’t hear a difference. So I decided to record some new material to see if I could hear any improvement and to my surprise I did. Wow, I never heard my recordings have so much realism. The sounds were identical to what I was hearing in the room. The conversion was close to perfect to the point that I could hear detail I never heard before. Once I connected the Micro Clock, the sound quality was even better. The change was so dramatic I had to change how I attack a mix. My recordings through the mod almost had this 3D sound quality to it. Actually mixing is easier compared to before. I don’t have to put so much effort trying to bring out certain instruments. The mod pushes instruments forward so it’s easy to let a certain instrument stand on its own and cut others back. 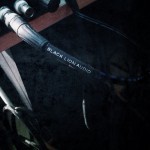 This mod is perfect for vocals. I use to dread recording and mixing vocals with my setup before mod but now my vocals really shine. If you have a good mic and pre-amp, you will hear the quality of your components more easily. The vocals are pushed forward so you don’t have to spend a ton of time keeping your vocals in the forefront. I did try the built-in pre-amps in the Fireface 800 and I could hear an improvement but it wasn’t enough for me to use them. The built-in pre-amp in the Fireface 800 is crap anyway.

I started recording some of my analog synths and instantly fell in love with the sound I was getting. I was hearing detail I never heard before with all these different nuisances floating around. My synths sounded awesome going through the modded Foreface 800 and I had a grin like a 6-year-old kid in a candy store. Everything going through the mod sound great and I’m real impressed with the quality of sound.

One issue that might scare some of my boom bap enthusiasts is that the sound quality can be too good at times depending on the materials you are recording. For one, sample base d musicians may have some issues when sampling from records or cds. The highs in the mod are so extended that your recorded sample may have sound artifacts that are present in the original but brought out and more obvious going through the mod. Records are already mastered and the highs are extended already most of the time so that can be difficult to tame in a mix. The sonic signature is so wide that fitting it in the mix is hard. Sampling records with more low-frequency sounds is easier to deal with so this might discourage some sample base producers from getting the mod. The guys at Black Lion Audio told me my mod is just like the 002 Signature series and Black Sparrow. I have different converters to get my samples in my computer so this is not a problem for me but for a person who just modified their only interface, you are stuck unless your interface has optical adat or spdif. If you are not a sample base musician the mod will work perfect for you. You could get their Sparrow which can make your setup more versatile.

The RME Fireface 800 mod is really good and I’m happy with it. The only problem is using samples from records or cds. You can still sample with Fireface 800 mod but you will be spending too much time trying to make room for it in the mix. That’s a big problem for me because I’m a sample based musician but like I said I have different converters I can use to get my sound in the computer. I don’t think the guys at Black Lion Audio were running records and chopping up samples to test their mods. From what I’ve seen they have done extensive testing with acoustic instruments, drum machines and synthesizers. I think they could sell more Sparrows and Mods to more sample base musicians if they address those concerns. I’m pretty sure many sold their Modified 002s for this reason. Black Lion Audio could have made improvements since I had mine done but I think this review will help a lot of people make a decision to get it or not. Now, does the mod make my Fireface 800 sound like a $5000 or more interface? It’s almost close. Let me know what you think.