Ok, here is my review. When I mentioned Word Clock to my colleagues, quite a few had no idea what I’m talking about. A Word Clock is a device that makes sure different digital devices that are connected be synced. This process is involving data keeping precise timing between the two or more devices. You ever notice while recording tracks that sometimes some tracks drift?  I use to notice this quite often but thought maybe I didn’t start recording at beginning of track. It turned out my interface was not converting analog audio to digital precisely. Most audio sound card interfaces have a word clock built-in already. Some guarantee anti jitter and the such. Years ago, I didn’t know what any of this meant until a few years ago when I discovered Black Lion Audio.

I setup an appointment with them to Mod my Fireface 800. Once my date was booked for mod, the guys at Black Lion Audio convinced me to purchased a Micro Clock. They told me it will make your sound better. After patiently waiting for my date I told them I would bring my Fireface 800 personally since I live in Chicago. The guys at Black Lion Audio convinced me to get the premium Word Clock cable. They said the premium was better plus you’ll get better sound quality. I said really! They said yes and I just took their word for it and bought it. The cable was $25 bucks. The cheaper one was ten but I wanted the best. It took them 3 days and I grab my clock and RME and went home.

Once I got home, I hooked up my Fireface 800 and I could hear a difference. It was subtle but I did hear improvement. After that, I hooked up my clock. I didn’t hear any difference but then I remembered the guys at Black Lion Audio said I won’t notice difference until I start recording. Wow, I could hear a night and day difference. If fact, the recording sounded better than hearing it in real-time while recording. Crazy. To make sure I was not fooled, I unhooked the clock and started recording without it and the sound was not as clear with detail like my first recording. I was amazed by the Micro Clock more than the Mod.

I’m really impressed with the Micro Clock and I promised myself not to record without it.  The looks are not great plus I’m not sure the power is on because there are no indicator lights. The only way I know it works is to check my interface because it has indicator lights for external master clock. I’m not sure how this clock works compared to others but for the price you can’t lose.  It helps my RME Fireface 800 sound better.  If you have a subpar recording interface, this mod is a must plus clock.  You just have to contact Black Lion Audio to see if they can mod it.  Either way, if you skip the mod, make Micro Clock a priority. 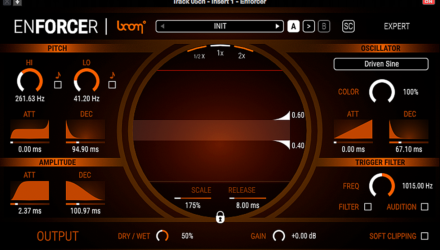